The multi-breakage phenomenon occurs in some large radius Air Bending operations, more commonly in thicker sheet metal and less commonly in materials with higher tensile strengths.  This means that the phenomena is less likely to occur in a thinner sheet of stainless steel and will be more pronounced in a thicker sheet of cold-rolled steel.  It occurs when the work piece begins to bend in such a way that it separates from the punch tip.  The work piece actually begins to bend in advance of the tip and is then forced out into a polygonal shape underneath the tip. 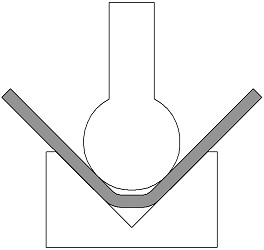 As you can see the work piece forms a polygonal shape as it’s pressed into the die.  You should also note that as the material springs back after the bend the actual radius will be smaller than that of the punch tip.  This Final Radius (FR) can be calculated from the Punch Radius (Rp.) and the Material Thickness (Mt.) by the following formula:

These phenomena can be prevented by specialized dies which push the work piece against the punch during the bend.  This ensures that the final radius is equal to the punch radius.  There are a few common die types which accommodate this.  Rolla-V type dies use a rotating, spring loaded set of pads to cradle the work piece.  As the punch pushes down through the metal the rolla-v’s pads roll with and support the work piece, providing pressure against the punch tip.  This ensures an even breakage around the radius and allows for easy over bending to compensate for Spring Back which can be significant for large radius bends.

Spring loaded bottom cushions set at the center of the die will apply upwards pressure throughout the bend, pushing the work piece against the bottom of the punch, preventing the multi-breakage phenomenon.  A stronger spring will create a better radius at the cost of added tonnage. 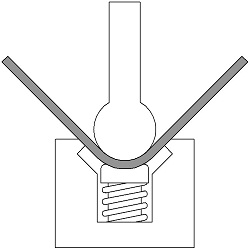 Urethane pads are often used in large radius bending applications where lack of die marking and smoothness of bend are important factors.  The way urethane bending works to form a radius is a pad of flexible urethane rubber is placed inside a typically aluminum holder.  The work piece is situated on top of the urethane and the punch is pressed down into the pad.  The pad deforms around the punch and work piece exerting pressure against the work piece preventing the breakage from occurring. 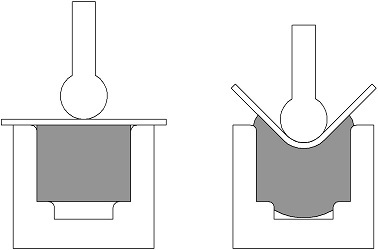 Large dies used for these types of bends often have v shape at 90°.  The reason for this is because most punches, unless customized, are designed at 90°. However standard v opening dies do not help very much when compensating for Spring Back.  Bottom bending and coining are not possible with standard v shaped tooling because the punch tip cannot reach the bottom of the workpiece and instead ends up Coining the two points of contact with the die.  This does not achieve the same effect as Coining with an acute punch and so Spring Back is not eliminated. 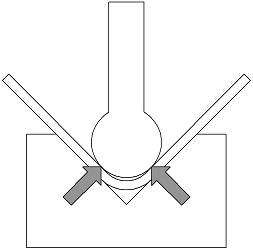 Because of the need to compensate for Spring Back by Air Bending many large v opening dies will have a relieved area which allows for a radius punch to push deeper into the die.  While this does not eliminate multi-breakage in the work piece it does increases its consistency and predictability. The addition of a urethane pad at the base of a relieved die will eliminate the multi-breakage phenomenon and allow for consistent bending to the punch radius. In the image below you can see how a relief type die allows for greater over bending of the work piece. 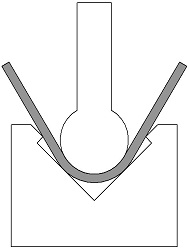 To actually select the size of your V Opening (V) for large radius bending you will use a simple formula which takes into account the Punch Radius (Rp.) and the Material Thickness (Mt.).  For a standard v opening with no relief you will use:

For the relieved type dies you don’t need as much of an opening so the formula below is used:

If you are going to venture into custom tooling in order to solve for Spring Back then you will want to match your die angle to the amount of Spring Back.  This method of tooling is a more practical method than using extremely large v openings.  To calculate the necessary Die Angle you will simply suptract the Spring Back from the desired Bend Angle.