Proper brake maintenance, cleaning of dies and careful alignment are key first steps to ensuring accurate and reliable bending.  However even after taking the necessary precautions Bend Angles can still end up being irregular across the length of the bend due to crowning or other machine related flexing.  The most common form of flexing that occurs in a press brake is what is known as crowning.  Crowning occurs when the upper and lower beam, despite their often significant structure, flex away from the work piece in the center of the brake.  Most brakes are driven by two points at either ends of the press.  These points can be the cams of a mechanical brake or the cylinders of a hydraulic brake.  The entire force of the brake is driven through these two points, so the longer the beams, the more room for deflection.  Below shows a generic Brake Press whose upper beam is undergoing crowning. Before using shims to recover from the effects of crowning you should, if possible, bend your work piece at the center of the brake.  While this won’t eliminate the crowning it will center it on your tooling, making it easier to compensate for. 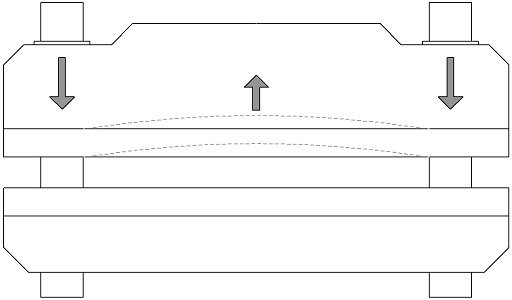 Once the need for shimming has been established, and all other basic assurances have been made that the machine is functioning properly, you will begin to slowly add height to the areas where your Bend Angle is large.  The most effective method for shimming is removing the die and placing a piece of paper under the area where you are looking to shim.  Depending on your v opening a single sheet of paper can add as much as 1° to that area of the bend.  The larger the v opening the more shimming will be required to achieve this because the punch has to travel further in order to affect the work piece.  It is important to stress this level of precision to new operators in order to prevent dangerous over shimming on the first try.

Another common situation which can be solved with shimming is the twisting of a Brake Press when the tooling is off center.  Many times a setup will call for different sections of a Brake Press to be used to bend different parts of a work piece.  This typically involves moving the work piece from one end to the other during the entire bending process.  When the work piece is at one end of the press it is going to unbalance the load at the other end.  This can at best force the machine to compensate with hydraulics, and at worst cause a machine stop or failure.  A Forming Shim is a piece of the same material which, already bent, can be placed inside the v opening at the far end of the brake, sometimes with the addition of a paper shim, in order to balance the load at the bottom of the bend.   This type of shim can run the entire length of the Brake Press is necessary in order to even out the load.  Forming shims are especially useful when Bottom Bending and Coining because the majority of the tonnage will be applied after the punch has made contact with the shim. 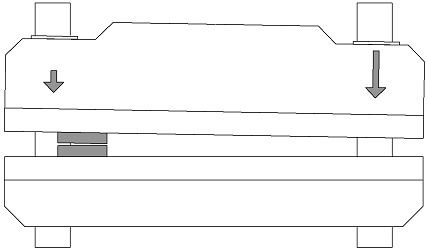 As you can see above, a bend operation set up on the left end of the brake causes uneven force to be applied, resulting in a twisting of the upper beam.  Even a single degree of rotation on the upper beam can be significant to the operation of the press.  In this operation adding a forming shim to the right end of this brake would have prevented the twisting from occurring.

Forming Shims are also commonly seen on Window Punching operations because they help re-balance the load back into the center of the punch.  The shims are added to the punch area outside of the window.  This adds a layer of protection against crowning inside the window area. 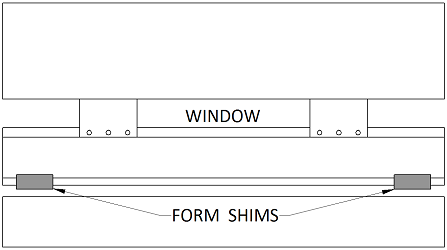 As we discussed proper maintenance, calibration and cleaning of your Brake Press will eliminate the majority of accuracy issues seen by operators in day to day operations.  Most modern brakes have methods of compensating for crowning and twisting which, while not always perfect, can be highly effective at reducing inaccuracies.  Coatings on materials, material tolerances, and stickers or labels added to parts can all cause bends to change along the bend lines.  While form shimming is rather benign, adding a shim underneath your die should be a last resort at correcting parts.  Over time the tooling will begin to wear in, adding an additional level of wear around the shim, resulting in the need for more shimming.  This can make the problem worse and eventually end up ruining the die.