Urethane and Polyurethane are interchangeable terms for an artificially created rubber.  The mechanical properties of urethane allow for excellent resilience, toughness and load bearing capacity.  These properties can be specifically controlled through different mixtures of the rubber’s ingredients.  Urethane also has high resistance to mechanical fatigue, shear, and corrosion, impact and mold contamination. 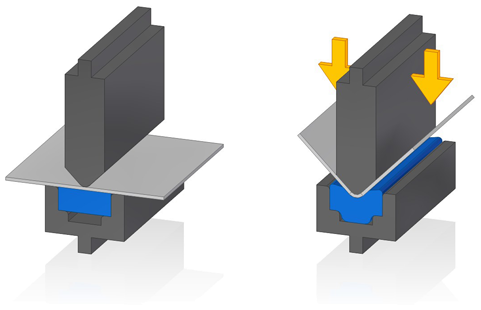 Urethane Tooling incorporates a rubber pad held in place by a retaining block in place of a traditional die. Special punches are not required for this method of fabrication. The sheet metal is placed flat on top of the urethane pad before the punch tip s forced down into the pad. As this happens the pad deforms around the punch providing pressure against the work piece, forming it against the punch.  Below is an example of a basic setup with a large radius die.

Urethane Tooling is advantageous when the goal is to form large radii, minimize die marking or form complicated profiles in a single stroke.  Below are the pros and cons of utilizing this tooling.

Urethane tooling has its own set of terminology which is important to understand when investigating this type of die for your shop.  For clarity the below diagram does not show the sheet metal work piece. 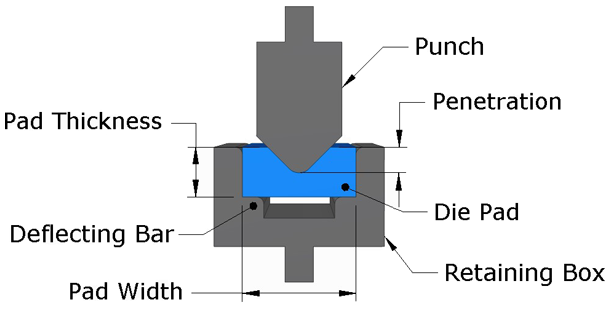 In order to ensure that there is no failure of the die and that the pad is going to have enough room for deflection there are a few rules of die selection that you should follow.  V shaped pads are available which fit into standard v opening tooling.  V shaped pads can accommodate very small flanges, though a wrap piece may be necessary to prevent the tip from digging into the urethane.  Before selecting a v shaped pad, you must first consider the same volume requirements as a rectangular pad.

Compared to regular v opening bending Urethane Tooling will require significantly more tonnage to achieve the same type of bend.  This tonnage will be at least 3 times that of Air Bending.  Deflection bars and customized pads can be used to reduce the tonnage.  Estimating the tonnage can be rather difficult so prototype bending is almost always going to be required.  To begin your test bends the following formula can be used to get you close to the correct tonnage.  The formula will incorporate the Material Thickness (MT) and the the Inside Radius (IR) of the bend to determine the number of tons per inch required.

The term poly-die is used to describe a urethane pad with a an open area inside its profile.  The usually circular opening is used to reduce the required tonnage when forming a bend.  Poly-dies are typically divided into two categories; flat poly-dies (PODs) and poly-u-dies (PUDs).  PODs are poly dies with flat forming surfaces. PODs are used to form up to 90° bends with varying radii. PUDs are poly-dies with a U shaped relief on the forming surface.  By forming the sheet metal into this feature 180° bends can be formed in a single stroke, over bending up to 15° to accommodate spring back.  Below the PUD is shown on the left and the POD on the right along with a sample profile. 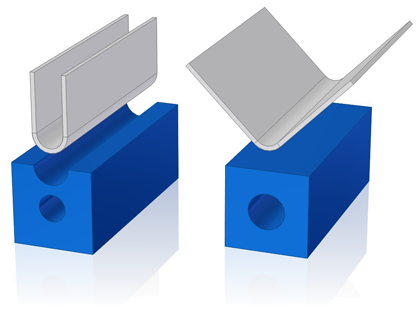