Down acting brakes are by far the most common type of press brake in the industry today.  The operate on the basic principle that the upper beam holds the punch and is lowered into the die.  Almost all mechanical press brakes are down acting types.  This tends to be an intuitive design for new operators. 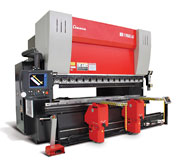