Press brakes, also known as Brake Presses or just brakes are machines used to bend sheet metal using tooling known as dies and punches.  The Brake Press typically has an upper and lower section.  The upper holds a piece of tooling known as a punch which has a general v shape to it, the lower has a matching shape and it known as the die.  The two sections of the press brake are moved together forcing the sheet metal between them to bend.

Brakes are described by basic parameters; tonnage and the working length. Additional parameters include the stroke, the distance between the upper and lower tooling or side housings, distance to the back gauge, and work height. While most Brake Presses operate within typical ranges there are many specialized types for special applications. If you are going to be investing in a new or used Brake Press be sure to consider all aspects of the type of bending which you will be doing. 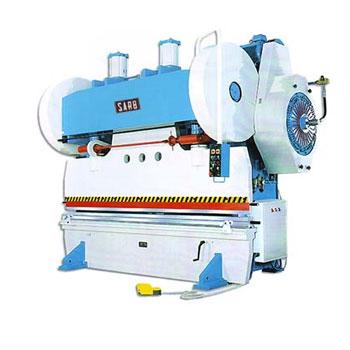 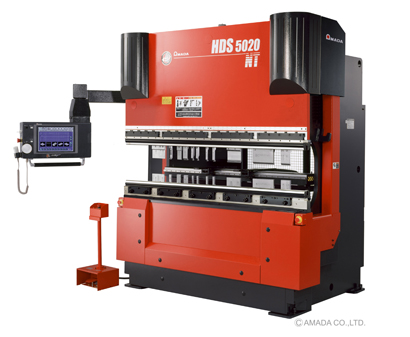 There are a few basic types of brakes as described by the means of applying force: mechanical, pneumatic, hydraulic, and servo-electric.

In a mechanical press, energy is added to a flywheel with an electric motor. When the operator engages the machine a clutch connects the flywheel to a crank mechanism that moves the ram vertically. Mechanical presses are typically not used for accuracy because once their stroke is started it must cycle through completely. There is no control as to the speed of the ram which adds an element of danger to the operation of these types of machines. Because of this mechanical presses are not a popular in high end fabrications. However due to their simpler design they offer an affordable alternative for some shops which do not require accuracy and control.

Pneumatic presses utilize air pressure to develop tonnage on the ram offering an upgrade from the simpler mechanical type however they are typically relegated to lower tonnage operations.

Hydraulic presses operate by means of two or more synchronized hydraulic cylinders on the C-frames moving the upper or lower tooling. Servo-electric brakes use a servo-motor to drive a ball screw or belt drive to exert tonnage on the ram. Hydraulic presses have dominated the market since the late 1950’s because of their advantages in accuracy, safety and control. These presses can move up or down at any point in their operation and can even be tilted by putting different tonnages on each cylinder, allowing for more complicated crowning control.

Recent improvements are mainly in the control and a device called a back gauge. A back gauge is a device that can be used to accurately position a piece of metal so that the brake puts the bend in the correct place. Furthermore the back gauge can be programmed to move between bends to repeatedly make complex parts. Early brakes relied on the tooling to determine the Bend Angle of the bend. The animation to the right shows the operation of the back gauge, setting the distance from the edge of the material or previous bend to the center of the die. Brake presses come in all shapes and sizes from the small to the gigantic. Tooling also ranges from the basic v shaped punch to customized goose neck and deep box tooling which allow special profiles to be bent.